This trip heads south from Inverness along the sides of Loch Ness, passing through Drumnadrochit – (‘Druim na Drochaid’;  the ‘high ground at the bridge’) and by Urquhart castle before crossing over to the west coast at Shiel Bridge. Along the way we’ll follow one of the main mountain passes from west to east – a historic route winding its way between the steep and dramatic peaks of the south Kintail ridge and the ‘five sisters’ to the north.

Not long after we reach the sea stands Eilean Donan castle – a truly iconic Scottish castle, and commanding a strategic location at a historically important ‘crossroads’. Eilean Donan has featured in several major films, including the original ‘Highlander’.

We’ll follow the coast to Kyle of Lochalsh. Depending on the state of the tide we could stop to look across the water to the remains of HMS Port Napier – a WWII minelayer which exploded in dramatic circumstances in 1941. Once upon a time, with its railhead, Kyle of Lochalsh was the main ferry port to the isle of Skye and the Outer Hebrides. Nowadays the ferries to Skye have been replaced by a dramatic bridge – the funding of which caused a great deal of controversy. We’ll cross over to Skye via the bridge, to Kyleakin (‘Caol Àcainn’; Haakon’s Kyle) a placename showing the significance of the Highlands’ Norse or Viking heritage.

We’ll return back across the bridge and return to Inverness via Strome ferry, Strath Carron, Garve and Dingwall. The word ‘Strome’ has come into Gaelic as ‘Stròm’, but is originally Norse, from ‘Straum’ which means stream. If the tide is running through the narrows below, it will be obvious enough where the placename came from. Nearer Inverness, Dingwall in another place name drawn from Norse – from ‘Tinwald’ or ‘meeting place’. 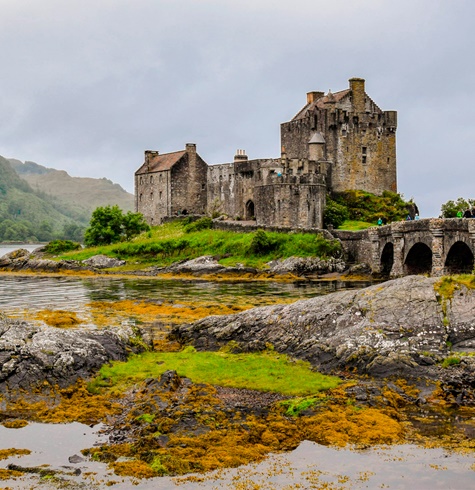